Right after the completion of the vernissage  of    Island reflections  in  Holland  Michigan  USA  at the De Pree Art center of Hope college , an exhibition figuring  the  contemporary  Art of Curacao     curated  by  Susan Wilczac  and organized by  Marliyn  Schanze   , we  , the ZZ Team trusted our fate to flipping a small one cent  American coin , to lead the way and the Pawnee Indian museum  in Republic Kansas  got to be one of the destinations , the sacred coin drove us  to .

We were received by the State historic site administrator , Historian and Anthropologist   , Mr Richard Gould  and soon enough the discussion derived on “ why would  a highly harmonious and Spiritual  community have to go to close to  extinction  . “

To our amazement , we learned that Pawnees were not so peaceful  , and extremely feared on the great plains , warring and  kidnapping other  tribes’ individuals , to serve  as  sacrificial offering to the great Spirit .

Still the Pawnees lived  mostly in peace , governed  by council without  any single  point of authority , but for global consensus , explaining why the French called them the republican people  . The women  tending the fields  , building the houses , and  caring for the children , the  grand parents  educating them  ,  and the men hunting  .

Coming from an  island where  such small peaceful communities  , of great spiritual cultures , living in and with nature with outmost respect  and  gratitude  ,  got totally  annihilated  by the Europeans powers  which considered them as unusable persons  ,    we  were aware through experiences that in such  genocidal events  a  grander  purpose was at work . A deeper Reality  beyond mental understanding ,but undeniable nevertheless  .

The Universe does not waste .

Pain with a reason  becomes   Sacrifice     .   Just like the crucifixion  , leading to expansion  of wisdom and  love  .

A  part of humanity , would sacrifice for the rest of It  .

Lo and behold , 5 minutes after our exchange  , a spectacular view , made of ancient pieces of wood , probably from an Indian bed , half rotten on the floor , revealed  itself  after  22  years  of the museum existence  . 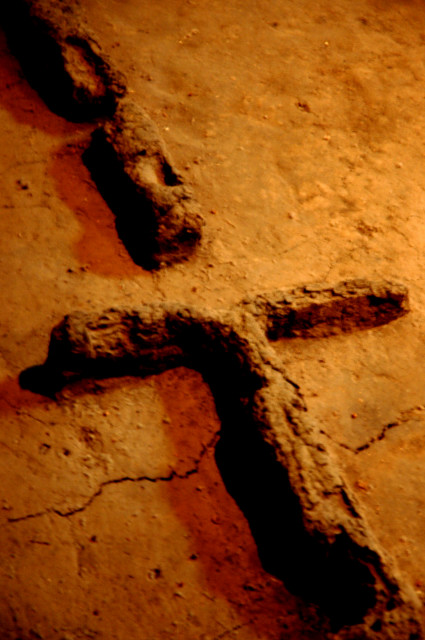 Jesus on the cross with an Indian feather

The victims transformed into heroes .What a tough world  .  God bless